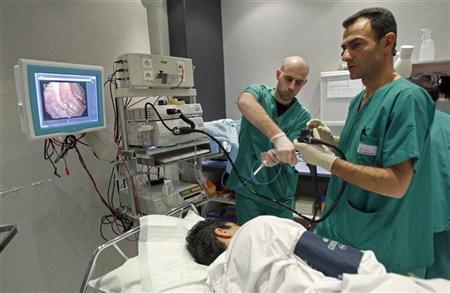 NEW YORK (Reuters Health) – Colonoscopy has become an increasingly popular method of screening for colon cancer while the rate of at-home stool testing has dropped off, according to a new study.

The findings, published in the journal Cancer, are primarily driven by a trend among people above the poverty line preferring colonoscopy; poor people still choose at-home testing as frequently as they did a decade ago.

Dr. Chyke Doubeni, a professor at the University of Massachusetts Medical School who was not involved in the study, said the results demonstrate that in order to raise screening rates in lower socioeconomic-status groups, all types of colon cancers tests should be encouraged.

“Health care providers need to give patients options for screening, not just colonoscopy for everybody,” Doubeni told Reuters Health.

Colonoscopy is an invasive procedure that uses a camera called an endoscope to look for signs of cancer within the colon and rectum.

But the USPSTF doesn’t endorse any particular type of test over the others — it recommends screening either with a colonoscopy every 10 years, with another invasive test called a sigmoidoscopy every five years or using an annual at-home test called a fecal occult blood test.

The home-based test looks for signs of blood in the stool. If the test comes back positive, a colonoscopy is then recommended to determine whether a person has cancerous growths in the intestine.

According to the American Cancer Society, a person’s risk of developing colon cancer over their lifetime is about one in 20.

Previous studies have shown that although colon cancer screening rates have increased over the past decade, people in lower socioeconomic-status groups are less likely to be screened in general.

Priti Brandi, the study’s lead author and a researcher at the American Cancer Society, said her group wanted to see whether people’s preferences for either type of test have changed over time — understanding that could help doctors and public health policymakers focus their efforts toward increasing cancer screening, she explained.

Brandi’s team analyzed data from thousands of adults 50 to 64 years old, across the U.S., who responded to the National Health Survey.

Over the entire study period, the number of people who did an at-home fecal occult blood test dropped by about six percentage points.

When Brandi grouped survey participants by income and education levels, she found the biggest changes in use of the at-home test among those with higher education and income levels.

Home-based cancer screening dropped from 19 percent in 2000 to 10 percent in 2008 among people with a college degree, for example.

For people with low incomes or low education levels, at-home screening levels remained stable over the years at around seven to nine percent.

While at-home testing was declining, the endoscopic tests — colonoscopy or sigmoidoscopy — were becoming more popular among those with higher incomes and educations.

Thirty-five percent of people with the highest incomes had an endoscopic screen in 2000, compared with 56 percent in 2008.

In contrast, 23 percent of participants below the poverty line underwent a colonoscopy or sigmoidoscopy in 2000, compared with 29 percent in 2008.

Brandi says one likely explanation for the slower uptake of endoscopic screening methods among the poorer groups is cost.

“Lower socioeconomic groups are significantly less likely to have health insurance and more likely to have barriers in terms of paying for — even if they are covered — more expensive procedures like colonoscopy,” she told Reuters Health.

A colonoscopy can cost upwards of two thousand dollars, compared to several dollars for a home-based fecal occult blood test.

Even if people have insurance, they might have a co-pay for the exam.

“It’s not all about costs,” Doubeni said, however, “it’s about a system of care, it’s about resources, it’s about access to care and cultural differences.”

Doubeni said physicians need to be sensitive to the fact that some patients might prefer one test over another.

“Because these all have similar benefit, the focus should be on maximizing the number of people screened one way or another. Patient preferences are important here,” Dr. Virginia Moyer, chair of the USPSTF, agreed in an email to Reuters Health.

Indeed, a recent study found that colon cancer screening rates shot up when patients got to choose which type of test they would have. (See Reuters Health story of April 9, 2012.)

“A lot of physicians in the United States, they don’t even think about stool testing. They’re not doing a good enough job of laying out options for patients,” said Dr. Joshua Fenton, a professor at the University of California, Davis, who was not involved in the new study.

He said that encouraging home-based stool testing might be the easiest way to increase screening rates in lower socioeconomic-status individuals who don’t have ready access to colonoscopy.